As provided to us by Cooke’s beloved human… 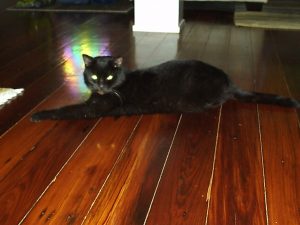 Cooke peacefully departed this world today and went to join her beloved sister Clotille.  She lived 18 beautiful years and truly was a survivor.  She spent most of her years patrolling the west end of Barrett St. in Uptown New Orleans.  More recently she became a denizen of the Black Pearl and was anxiously awaiting the renovation of her new digs.

She once endured a stressful 19-hour car ride to Little Rock, Arkansas, the day before Katrina hit New Orleans.  She was uprooted from her home for seven months, spending time in Plaquemine, Baton Rouge, and Cookeville, TN, the city she gets her name from.  There, she spent many peaceful days with Leo and Gloria.  She nestled by the fireplace in her fleece bed and spent time in the most beautiful garden she had ever seen.  She even walked in the Tennessee snow.

In the rough and tumble days back home after Katrina, she survived numerous close calls with stray canines, twice being treed 15 feet up in her favorite pecan tree.  Her agility and flexibility proved invaluable in her escape under the back fence from a neighboring pitbull.  A rogue tomcat once punctured her neck deeply, narrowly missing her jugular.

She lost her sister and partner-in-crime Clotille in an accident in 2012 and missed her dearly every day.

She was diagnosed with soft tissue sarcoma cancer in 2013.  She had a marble-sized tumor removed from her cheek.  The cancer was supposed to return but it never did.  Most recently, she battled stage 4 kidney disease for two years.

Cooke really enjoyed visiting Trish and Phil on St. Charles Avenue.  They let her roam throughout the big, beautiful home and lovingly took care of her when Matt and Jenny were gone.  She loved to meow a lot and had some of the most intricate combinations you’ll ever hear.  She was known to follow her Papa around the house when he was eating cereal….she loved the sugary milk at the bottom of the bowl.  It was Cooke’s zest for life and the outdoors that kept her going, along with Jenny’s many trips to the Vet with her.  Even at her new home, she loved to go out on the patio, where she would smell the flowers and listen to the birds.  We will miss her dearly but her big, beautiful eyes will continue to shine in our hearts forever. 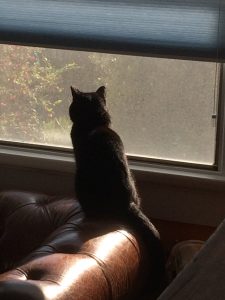 As provided to us by Chili’s beloved human… 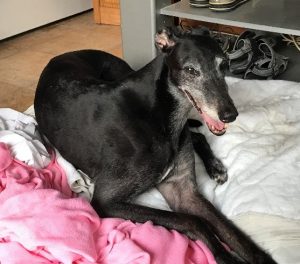 I lost my best friend today.  It was a terribly sad day.  The pattern of my life will no longer revolve around her.  No more morning walks before work.  No more afternoon walks after work.  I look up expecting to see her resting on the living room futon.  She’s no longer there.  The house feels empty without her.  I can’t remember when I felt so all alone.

Chili was born in Mobile, Alabama on October 17, 2007.  She never distinguished herself as a racer.  She retired after only eleven races, never a winner.  But Chili had different plans for herself.  She was out to win hearts.

I first met the little girl when Shadow* and I walked into the local Petco.  There was a greyhound meet and greet that afternoon.  As we made our way down the aisles, we noticed another greyhound closely following us from behind.  She was cute and beautiful.  We immediately took a liking to her and it was obvious she liked us.  She wanted to come home with us that day.  However, I wasn’t quite sure.  But the following week after learning she was still up for adoption, she won my heart.  And that day forward she became known as Chili.

Chili never won any races, but goodness gracious, she was a champion walker.  Chili and I were often seen walking down St. Charles Ave., through Audubon Park and then up Magazine Street during the evenings.  From time to time we would change our route and cut through the Tulane and Loyola campuses before heading back up Freret Street.  All the students would greet the little girl with affection.  She loved the attention.  And I enjoyed telling them a little bit about her racing career, or lack thereof.

During cool evenings, Chili could walk forever. She liked to keep going, but I sometimes enjoyed stopping to chat with people along the way to discuss the pedestrian events in our lives.  Chili would patiently wait beside me on those occasions.  She was always the prim and proper companion, and she lessened my rough around the edges exterior.

The little girl never had much fur, so on cold nights she would snuggle under the sheets, pressing against my chest.  That was quite alright with me because she kept me warm as well.  But I must admit that she had her own special way of hogging the bed and blankets.  I would often awake in the mornings falling out of bed and without any blankets.  She enjoyed kicking me out of my own bed.

I will miss all her enthusiastic greetings whenever I returned home.  I would tell her to watch the house whenever I left.  This was a tall order for a little girl.  And yes, I suspected she simply slept on the living room futon all day long instead of watching the house.  But the house and all its belongings were always there when I returned.  And she always greeted me with such enthusiasm when she heard me open up the front yard gate.

Chili leaves behind two big holes next to her favorite sago palm in the backyard.  She never managed to dig deep enough to strike oil.  But she tried.  She also leaves behind my broken heart. 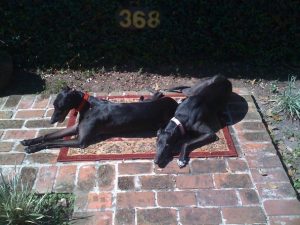 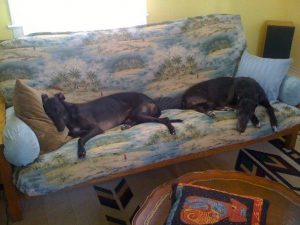